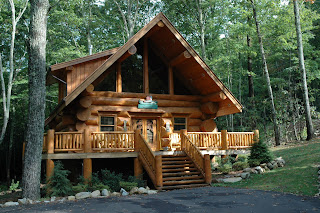 Smoky Mountains, Tennessee, is a mecca for log cabin accommodations to appease the thriving tourism in the 21st Century. The Smoky Mountains & their National Park serve as an impressive landscape and background for this vacation rental community. There are over 15,000 cabin rentals throughout Gatlinburg, Pigeon Forge, & Sevierville, Tennessee. Log cabins had long existed in this community as witnessed when driving through Cades Cove in the Great Smoky Mountain National Park. The vacation rental cabins now are far more luxurious than the cabins built over 100 years ago in Eastern Tennessee, but they pay homage in a way to the communities and culture of the 19th Century residents of this historic area. Who would have thought back then that one day people from all over the World would come to the Smokies to enjoy a log cabin that had a jacuzzi, hot tub, billiards table, indoor swimming pool, sauna, home movie theater, and something called the Internet (WiFi, at that!). 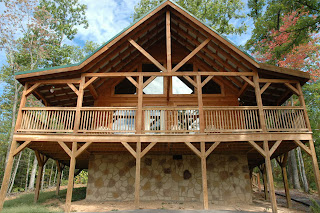 Log cabins were built from logs laid horizontally and interlocked on the ends with notches (British English cog joints), although there are many log cabins that are laid up without notches and simply spiked together. This is not common as it is not as structurally sound as notched log walls, but modern building methods allow this short-cut. See the Syringa B&B lodge in Salmon, Idaho as an example.

Details of cabin corner joint with squared off logs.The most important aspect of cabin building is the site upon which the cabin was built.

Site selection provided the cabin with both sun, light and drainage to make the inhabitants better able to cope with the rigors of frontier or rural life, but proper site selection also placed the home in a location that was best suited to manage the farm or ranch of the owners.

When the first pioneers built cabins they were able to "cherry pick" the best logs for cabins. These would be old growth trees with few limbs (knots) and be straight with little taper. Logs of this type didn't need to be hewn to fit well together, as careful notching would minimize the size of the chink (space between the logs) and reduce the amount of chinking (sticks or rocks) or daubing (mud) needed to fill the chink.

The process of building a cabin began with the selection of the building site. It may need to be cleared or not.

Decisions had to be made about the type of cabin to be built. Styles varied greatly from one part of the US to another. The size of the cabin, the number of stories, type of roof, the orientation of doors and windows all needed to be taken into account when the cabin was laid out.

In addition the source of the logs, the source of stone and the available labor either human or animal had to be considered. Timber sources that were further away may have limited the size of the cabin.

Cabins corners were often set on a large rock; if the cabin was large other stones would have been used at other points along the sill (bottom log).

Thresholds, since they were usually cut into the sill, were supported with rock as well. These stones are found below the corners of many 19th century cabins even today as they are being restored.

Cabins were set on foundations both to keep them out of any damp soil but also to allow for storage or cellars to be constructed below the cabin. Cabins with earth floors have no need for foundations. 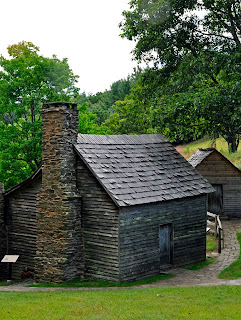 Log cabin in Minnesota Cabins were constructed using a variety of notches. There is considerable confusion about the nature of notch types and possible European connections. Notches can vary within ethnic groups as well as between ethnic groups.


It is almost futile to worry about this sort of issue yet one finds discussions of these in many texts. Notches vary on a single building so it is hard to argue that any particular group used one notch type exclusively.

Log cabins can be constructed with either a purlin roof structure or a rafter roof structure. A purlin roof consists of horizontal logs that are notched into the gable wall logs which are progressively shortened to form the characteristic triangular gable end.

Very steep roofs might have as many gable wall logs as a full story. Issues concerning the amount of eave overhang and if there was to be a porch also influenced the layout of the cabin.

The decision about which roof often was based on the sort of material that would be usd to cover the roof. Where sawn lumber was available rafters of dimensional lumber became popular.

These roofs typify many log cabins built in the 20th century, having full cut 2x4 rafters covered with skip sheeting and cedar shingles.

Purlin roofs found in rural settings and locations where sawn lumber was not available often were covered with long hand split shingles that covered two shingles and part of the space between another.


The history of log cabins reached it's peak of complexity and elaboration in the Adirondack cabins of the mid 18th century. These formed the basis for many United States Park Service lodges built at the end of the 19th and beginning of the 20th century.

The history of log cabins never died out or fell out of favor though it was surpassed by the needs of the a growing urban America. During the 1930's the Civilian Conservation Corps built many log cabins throughout the west for the Forest Service and the Park Service. Timberline Lodge on Mount Hood was built during this time and was dedicated by FDR.

In 1930, the world's largest log cabin was constructed as a private resort in Montebello, Quebec, Canada. Often described as a "log château", it now serves as the Château Montebello hotel. 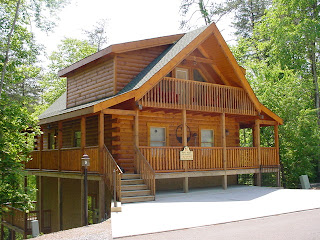 The modern version of a log cabin is the log home which is a house built most often from premilled logs. The logs are quite visible on the exterior and sometimes interior of the house.

With the advent of cranes and modern construction and design techniques (such as CAD). These cabins are mass manufactured, traditionally in Scandinavian countries and increasingly in Eastern Europe, using squared milled logs and pre-cut for easy self build.


Log homes are popular in rural areas, and even in some suburban locations. In the American West, McMansions (houses of over 3,000 sq ft) of log and stone are turning up in many resort communities. And kit log homes are major consumers of logs in the US west.

In Europe, modern log cabins are often built in gardens and used as summerhouses, home offices or as an additional room in the garden. Summer houses and cottages are often built from logs in northern Europe.

Chinking refers to the mortar/infill material between the logs in the construction of log cabins and other log-walled structures. Traditionally, dried Pleurozium schreberi and Hylocomium splendens were used in the Nordic countries as an insulator between logs.
Posted by The Gatlinburg Advisory at 1:57 PM