I was surprised to hear the original land, including buyout of all property owners & commercial businesses that were bought out, cost the government just $12 million dollars to account for the Great Smoky Mountain National Park.   With ten to twelve million visitors per year, we could acquire that in a year just by charging each visitor one dollar.  However, it is important to say that the attendance to the Park is free to all travellers.  Did you know the Great Smoky Mountain National Park is the most visited National Park in the nation? 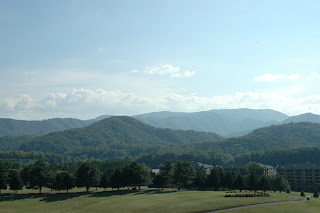 The park was chartered by the United States Congress in 1934 and officially dedicated by President Franklin Delano Roosevelt in 1940. It encompasses 814 square miles, making it one of the largest protected areas in the eastern United States. The main park entrances are located along U.S. Highway 441 (Newfound Gap Road) at the towns of Gatlinburg, Tennessee, and Cherokee, North Carolina.
Posted by The Gatlinburg Advisory at 3:38 PM